Apparently, I am not the only one on the words-mean-things bandwagon.

The only thing lately I've been inspired to write about blog-wise is tearing this state apart right now. Emotions are hot, tensions are high and very few seem able to separate reason from emotion regarding our governor and what is going on in Madison, Wisconsin (including me, at times probably, if I'm honest with myself). 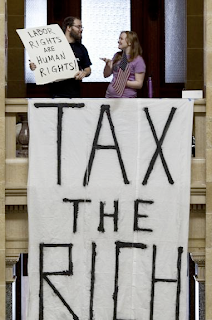 Credit: Tom Lynn of the Milwaukee Journal Sentinel
I have a choice: don't blog, which is the choice I have been making, or write about the budget bill already. (I suppose a third option would be write about something else entirely, but I don't want to.) 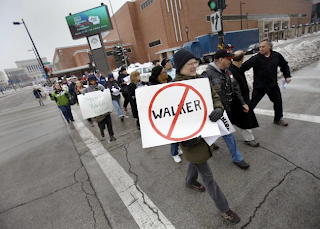 Credit: Mike De Sisti of the Milwaukee Journal Sentinel
I am not going to belabor what has already been said. And said. And said again. I have two thoughts I wish to convey, and then I'll be silent on the issue (well, until I'm not again, anyway).
1. Beyond what has been said about this bill, and beyond so many of the rumors and misrepresentation of certain things, what has bothered me the most is this idea that words no longer mean things. Let me preface the rest of this thought by saying I am not trying to paint with a broad brush; I do not pretend to know whether these sentiments are widely embraced by those protesting in Madison, and for the sake of what I am about to say, it really doesn't matter. 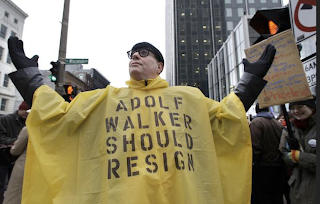 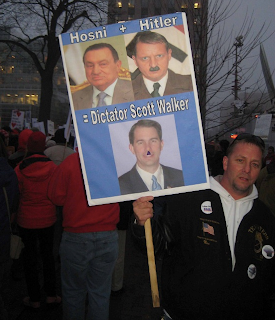 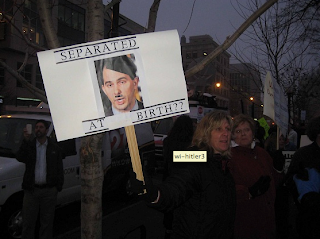 Dictator. Hitler. Mubarak. Democracy. These words, these people, they have meanings. They have actual definitions. I consider the idea that someone would categorize a popularly elected governor a dictator an assault on the English language. The actual definitions of dictator, according to the Oxford English Dictionary are as follows:

1. A chief magistrate with absolute power who was appointed in an emergency.

Governor Scott Walker has neither absolute power nor was he appointed in an emergency. For crying out loud, he was popularly elected in a high turnout election with fifty-two percent of the vote.

2. An absolute ruler, usually temporary or irregular, of a state; especially one who suppresses or succeeds a democratic government.

Governed by the laws of this state and being, in fact, only one part of a multi-faceted legislative body, it is clearly inaccurate to label Walker as an absolute ruler and, as for the rest of the definition, I should think it unnecessary to point out that Walker is neither temporary or irregular, nor has he suppressed nor has he succeeded a democratic government.

3. A person exercising absolute authority of any kind or in any sphere; a domineering person.

The OED provides an illustration to show what this definition is getting at: The dictators of behavior, dress and politeness. Even in this sense, and we all know this wasn't what the sign holders were getting at; they meant it in a political sense, it's a reach.

4. A person who gives dictation to a writer or recording machine.

I only included this because I am nothing if not thorough.

I don't know why I let this stuff bother me. Really, I don't. But, really, I would feel better seeing signs saying, "Walker is a Jerk!" or "Walker is a (insert pejorative of choice) because while I might disagree, at least it's clear what you're saying, and it also shows me, and others, that you have a good grasp of the language we're using to communicate, which is a good thing. I have to confess, I have spent an inordinate amount of time stewing about some of these signs, and not because I disagree with them, but because of the abuses these poor, misused words are taking. 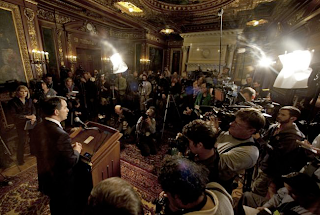 Credit: Tom Lynn of the Milwaukee Journal Sentinel
2. Like I said, I'm not going to get into particulars, but I would feel remiss if I didn't state, clearly and unequivocally, that I support our governor. He has stood fast in the face of enormous pressure, and I feel it is the least I can do to publicly support him here on my little corner of the internet.

There. I feel better.

Remember this? It's really something when a thing we believe is possible, but unlikely, actually happens. The feelings of disbelief and excitement are almost unmatchable, no matter what the occasion. 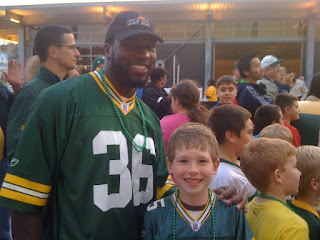 Hank and Packer Pro Bowl safety Nick Collins.
Tomorrow the Packers will play the Pittsburgh Steelers. It will be their third Super Bowl appearance in my lifetime, but the first in which I have been a true, informed fan. Sure, in the 1996 season I knew who Brett Favre was, and that I sort of wanted the Packers to win, but my night would not have been too different had the Patriots ended up pulling out a win. 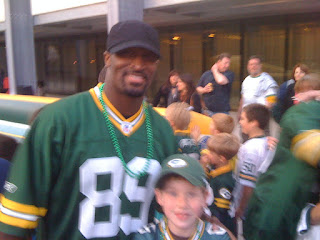 Hank and Packers wide receiver James Jones.
But this year? Oh, this year is very different. I've watched every second of Packer football these past few seasons. I feel like I know these guys. See Nick Collins up there? He sealed the deal against the Bears with a late interception on the final drive of the game we went to in January; that victory ensured our playoff berth. James Jones? He had that unforgettably ridiculous catch in the end zone against Atlanta in the playoffs. 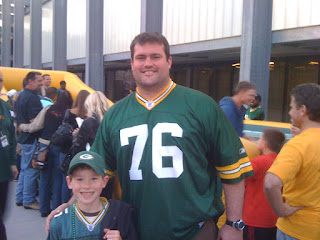 Hank and Packers Pro Bowl tackle Chad Clifton.
To suggest that I am excited about tomorrow is an understatement. I am excited. And nervous. Apprehensive. I want to win. A lot. 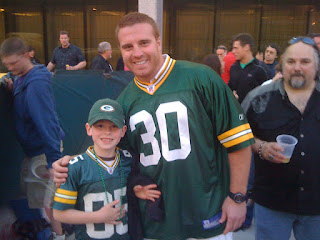 Hank and Packer running back John Kuhn.
Even though I'll be terribly disappointed if we lose, this season has been really fun. We weren't supposed to even make the playoffs, and now here we are, down in snowy Arlington, Texas, preparing for the biggest football game of the year.
Go, Pack, go! 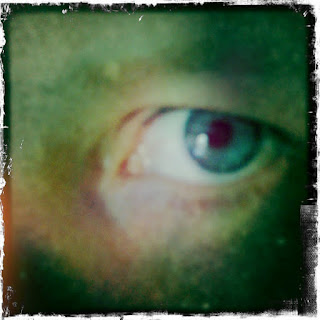 People, as a general rule, don't lead with their failings. We don't highlight them. Most people, I would say, hide those failings behind stories of success, stories of well-behaved children and academic and vocational accomplishment; we give others only a peek beneath the veneer upon close acquaintance.

Today I lost my temper. Hank delivered the final blow to a constitution that was already compromised due to two solid days of ill-behavior on the kids part. I gave Hank a chance. Go to your room. Now. It was an offer of escape. Temporary, yes, but doing so would have saved him forever, in this case, from me unleashing my anger in a torrent of ugly words.

He did not immediately go. He stood there, belligerently, and, ultimately, he stomped up to his room in dramatic fashion, meant to convey my wrongness and his rightness.

This should be an unspeakable event. I was wrong. I acted badly. He is eight, and I am not.

I forgave myself easily; this post is not wallowing. It is, for lack of a better explanation, reality. A moment all experience yet no one blogs about.

The Sound of Wind

The wind is whipping, screaming across our asphalt roof, its pitch frightening and captivatingly terrifying in its volume. The temperature outside stays steady, the mercury assuring anyone who looks that it's not as cold as the wind might attest.

But, oh! The wind! It is a powerful force, and one that cannot be tamed. It can be, with some wood framing, insulation and siding, endured, but never controlled. It hits hard, smacking those in its path, chapping cheeks, moving piles of snow and tossing aside objects left in its path.

Safe in my house last night, cushioned in between panes of glass and surrounded by smells of soup simmering the stove, the wind called to me last night. Its enchanting whistle begged me to come outside and listen, with no impediments, to what the wind had to say. Yes, the TV told me what the wind was supposed to bring, but listening to the wind itself made me certain that the promised snow was on its way.