Thanksgiving is so last week. It's all about Christmas now.

And, as usual, I'm behind the times. 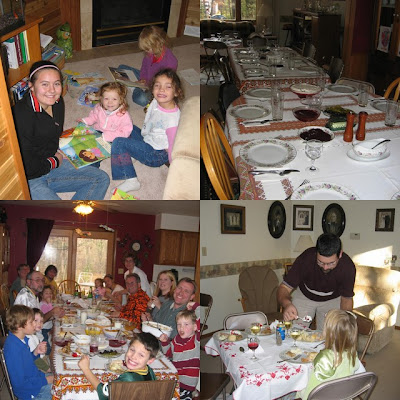 My favorite picture of the weekend though is of Superdad's uncle. Poor Uncle Johnny. All he wanted was some stinkin' pie and after the meal waited... and waited... and waited some more while people chatted, dishes were done and the pie was forgotten. Finally, he gave up, fork and milk still at the ready. 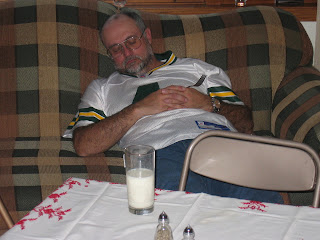 Shortly following Elisabeth's birth I was summoned for jury duty. Milwaukee County offers its jurors one six month deferment if they're unable to serve at the requested time. Having a newborn, exclusively breastfed baby I immediately realized I would be unable to serve at the requested time in January of 2006 or six months from then. On the advice of my in-house counsel I took Elisabeth with me, diaper bag, car carrier and all with the hope of being excused.

I never made it into the courtroom. After arriving at the courthouse the clerk in charge of checking the jurors in looked disdainfully down at Elisabeth and sneered, "What is that?!" I explained my predicament but the impatient woman clearly wasn't interested. She'd heard too many excuses from prospective jurors wishing to escape their civic duty, I suppose. Thankfully, the chief judge (is that what the head county judges are called? You'd think I'd know that, being married to an attorney that practices in that courthouse and all) Kitty Brennan was much more understanding in her response to me after I mailed her a letter summarizing my predicament. She postponed my summons for a two year span which, I understood to mean, I'd be summoned again in January of 2008.

Well, I got the summons and it's not for January of 2008. It's December of 2007-- right before Christmas. Ugh! All I can say is for once in my life procrastination has paid off because Superdad will be in New York during the time I'm expected to serve and I was planning on going with him, I just hadn't bought my plane ticket yet. Whew! At least now the Milwaukee County justice system won't deprive me of the cost of an airline ticket.

At this point I see little hope of being excused from serving. I'll play all my cards; my husband is a litigator, I'm a primary caregiver for our three children, we home school, for Pete's sake. But when it's all said and done I have a bad, bad feeling.

The other day Madeleine, Hank and I were discussing Christmas wish lists and all the toys lately filling their dreams. I explained that Christmas can't bring too many toys because we can't possibly fit thousands of new toys in our house.

"I wish we could get enough toys to stretch all the way to Chicago," Madeleine said wistfully.

"I think we'd need a bigger house," Hank interjected. "But that would be OK."

"But guys, if you had that many toys and that huge of a house we wouldn't have any money!" I reasoned.

A long pause followed this logical nugget. I eased back against my pillow, confident the discussion was over and I'd reasoned them into whittling down their Christmas list.

A small, dreamy smile broke out across Madeleine's face. "Yeah, but at least we'd have a lot of toys."

I have been up to my elbows in pie today. I'm not hosting Thanksgiving this year, my mother-in-law is. But I'm still baking the pies (which I volunteered to do because I like to bake).

But I'm sick of baking right now. I'm sick of pies. All told I have two apple, two pumpkin and one peanut butter chocolate pie sitting in my refrigerator right now and if you asked me to eat them right now I couldn't. I'm that sick of them.

And bless Superdad. He came home from work and dutifully smelled the pies and ogled over them to an appropriate degree. I now feel my time was well spent.

Off for Thanksgiving tomorrow with my internet-less in-laws. Back in a few days!

Lighting. Has anyone else noticed how this seems to be the forgotten stepchild of home decor? I've seen so many wonderfully decorated rooms ruined by an ill-placed overhead light or a cold, harsh light where a softer glow would have better suited the arrangement.

It's because of this that the fluorescent light bulb craze has been slow to grow on me. Yes, I want to save energy and money just as much as the next person, but not with harsh, neon-white light staring back at me, shattering the homey, warm feeling I've tried to create throughout my home.

Until now. Check these out. 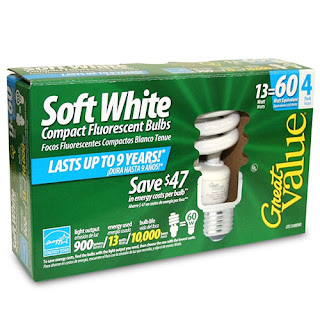 These are relatively inexpensive as fluorescent bulbs go and, better yet, their light quality is lovely. If you're like me and haven't found a fluorescent bulb you like yet, give these a go. I've been tremendously impressed.

What I Want for Christmas

Do you think I'm over-reaching?

A lot of people gripe about Halloween and all the candy that follows. I must confess that I rather like it. A Snickers here, a Milky Way there... what's not to love?

This year though we had a problem. A thirty-five inch tall problem named Elisabeth. You see, Elisabeth wasn't content with a Snickers here or a Milky Way there. No, Elisabeth spent all her free time moving stools and chairs, building towers, scaling furniture and devising new ways to reach the candy supply to keep a running flow of lolly pops, Smarties and Nerds rushing into her red little head.

I had to put a stop to it. But where could I put the candy where she couldn't go or configure a way to get to it?

Yes. The oven. That was my brainstorm. It locks, you see, and Elisabeth hasn't yet figured out how to unlock it.

Aren't you afraid you're going to burn all your candy? Diana asked me just last week.

I assured her, quite confidently, that I wasn't worried. I always, always, check my oven before turning it on, I boasted.

A mere two days later it happened. I was merrily whipping up a batch of chocolate brownies Saturday morning, humming along with my favorite Clementi sonatinas when I smelled something funny. Like burning plastic. Hmmmm. I wonder what that could be?

And then it hit me. All the kids' Halloween candy. Burned. And the basket it was stored in? Ruined. All those luscious Kit Kats and Reese's Peanut Butter Cups and 3 Musketeers. Gone. Forever.

I think most parents would consider it a blessing. Think of all the saved money on dentists visits and non-expanding waistlines. But my sweet tooth and I miss the candy.

I ran twenty uninterrupted, consecutive minutes last night. I did it and afterwards I felt great. In fact, at one point I glanced down at my trusty kitchen timer at a point where I thought I was a little better than halfway through and was surprised to see that I only had three minutes left.

Going into this running program it was always week five, day three that intimidated me the most. I feared that run and figured that if I could do that and not want to die, I could easily make it through to week nine, day three, which is run thirty minutes with no walking.

Honestly, I think I could have run thirty minutes last night.

My goals though, are still the same. Number one is to finish the Cool Running's Couch to 5K walk/run program as prescribed. I don't want to skip ahead or push myself beyond it at this point because I still am very much a beginner and, mostly, because I'm enjoying myself and I credit that to this program for not pushing me too far too fast.

My second goal is to work on my pace and get my mile under ten minutes (Superdad laughingly called that a "girly goal"). I'm almost there now and will start setting faster goals once I reach the ten minutes mark (want to race, Superdad?).

I don't know if you all know this about me or not, but last April when I said my competitive nature was usually repressed I was totally lying. (Sarcasm is a good friend of mine.) So the last goal I've set for myself (for right now, anyway) is to run a 5K sometime in early 2008. For now that's it, but once I attain my goals on running faster miles, I may set a time I want to hit.

After a week of not feeling that well, I just decided I may as well start my lackluster week five once again. I'm glad I did too, because even at full strength these have been tough runs for me. At the end I've felt tired but, more importantly, an overwhelming sense of accomplishment. Not only did I do it, but I could have done more.

Last night I ran eight minutes, walked five and then ran another eight. I felt seriously, seriously proud (and seriously, seriously tired) after last night's workout. Eight minutes! Ha!, all you marathoners out there are thinking. But to me? Well, I don't think I've run that far or long in years, and certainly whenever I did it never so manageable or enjoyable.

I won't lie though. Next up? An uninterrupted twenty minute run. I'm nervous!

Which U.S. city would you guess was the most addicted to caffeine? I would have guessed New York. I would have been wrong.

Chicagoans eat more chocolate and drink more cola than other U.S. urbanites, and are among the top consumers of energy drinks and coffee.

Week Five, Days Zero and One

I told you I'd tell about the good, the bad and the ugly, right? And this week, in regards to running, has been uuuu-gly!

Tuesday night I intended to go running. I really did. But I just couldn't. I was completely and totally exhausted and was unable to make myself go. I did run Wednesday but it became obvious to me during my run that I was coming down with a bug of some sort. Still though, I felt a sense of accomplishment because I made it through my run anyway.

I also was proud because I realized that when I started out running (a month ago!) ninety seconds was a big deal and now the least amount of running the Cool Running's program doles out are five-minute spurts-- and I can easily do it!

And that's it, folks. Here it is Friday and I need to squeeze two more runs in this week to stick to my goal. I think I need to develop some sort of alternate goal system for when I'm under the weather. Still though, I'm committed to making it out tonight. Or, if our church's social fish fry tonight goes too late, then tomorrow. And Sunday.

Good. I posted it here. Now I have to stick to it.

Today is my mom's birthday. She would be sixty-two years old today and in her honor the kids and I will make Junket today.

Here she is at our village's Independence Day Parade the year she died. 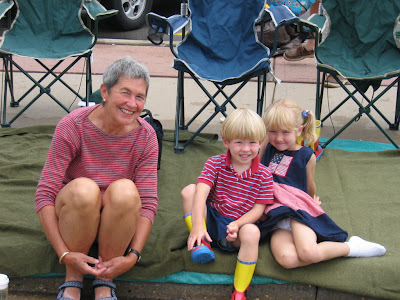 I still miss her a ton and would love to wish her birthday wishes in person and host the birthday celebration I'd most certainly be planning were she here. But, since I can't, this is almost the next best thing.