I said I would be blogging more regularly. Well, I meant it. It's just that a certain seven-year-old little girl in our house has a birthday on Sunday and I've been busy getting ready for the arrival and hosting of family for the event.

Oh, and I've also been busy setting up my new Lexmark printer/scanner/copier. I haven't had a printer for years and Joe and I have both gotten sick of me emailing him things I needed printed. Plus, Madeleine's Latin workbook for the fall only has one page of a drill she needs to repeat frequently, so we decided we a copy machine could be really, really handy.

And, yeah, I've been doing a fair amount of head shaking over the Brewer/Cubs games. I actually sat through the entire game last night. It was like driving past a car accident; it was so horrific I just wanted to look away, but just couldn't.

And speaking of birthday girls (which I was just a few, short paragraphs ago, remember?), do you know what she asked for this year? Guess. You'll never guess. No, not more things for her American Girl dolls, nor were books a noted request. No, Madeleine asked for a rug. A rug! She was leafing through a Pottery Barn Kids catalog and decided she wanted to change her room, so she asked for a new pink, white, and red polka dot rug. Who is this girl and what has she done with my daughter?

Oh my goodness, I am so excited I can hardly stand it. Whenever the Chicago Cubs come to Milwaukee to play Brewers fans get excited. The rivalry between the two teams has always been heated but this series, which starts tonight, has taken the rivalry to a whole new level.


The Brew Crew is only one game behind the Cubs for the first place spot in the NL Central Division. One game. And they play the Cubs tonight.


Joe and I are actually going to a much anticipated Ravinia concert tonight (in Cubbie land) with Bob and Sarah. Hopefully the Brew Crew will do well early enough that we can rib Cub fan Bob (who, I'm sure will do likewise if the Cubs do well).


In any event, this is going to be a huge series for both teams. Go Brewers!

Tomorrow morning Madeleine leaves for her first sleep away camp. Granted the camp is only two nights long but still... it's sleep away camp! It's over five hours away from here so the other moms whose girls are going and I are staying at a hotel/spa ten minutes away from the camp (yeah, yeah, how lame and overprotective are we?). I'm looking forward to a girls weekend of relaxing, reading, and chatting.

The reason I share this, though, is that I won't be blogging. At least I don't think I'll be blogging. Not that I've been terribly great about posting every day anyway, but I didn't want to get the Walnut Grove trip properly documented before I forget it all but that, like my home-schooling posts, basement "after" posts, and others, I'm sure, will have to wait until later. With me it's always later, isn't it. Hm.

We woke Saturday morning relatively early considering our late night of swimming and we were on the road by 9 a.m. or so.  Our destination was the Laura Ingalls Wilder Museum but on the way we serendipitously stopped for some much needed gas.  That decision was fortuitous not because of the gas that was about $.25 cheaper a gallon than in Wisconsin, but because while we were there we looked through some brochures we had in hand and decided that, since it was so close, we'd take an unplanned detour and tour the Sod House on the Prairie, which ended up being one of the highlights of our trip.

The Sod House on the Prairie isn't connected to anything Laura Ingalls Wilder, at least not officially and, really, until we got there we weren't quite sure what it was.  It rests on an ordinary Minnesota working farm that just happens to be owned by a history buff.  In the 1980s, I believe, the history buff decided he wanted to make a sod house as it would have been made in the time of the early settlers.  He set about doing research, finding untouched sod and began his project.

What stands there today is a roomy sod house, an outhouse, a sod dugout house (much like what the Ingalls family lived in when they first settled in Walnut Grove), and a small log cabin.  These buildings are surrounded by natural prairie grass (but for the path that's been mown for easier walking; surely the owners don't want tourists getting lost in the prairie grass on their farm like Laura and Carrie Ingalls did in one of the Little House books).

First on the self-guided tour wass the sod house. 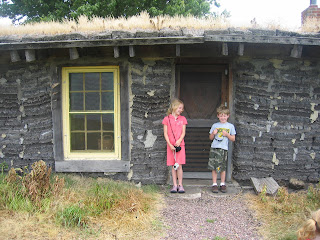 The inside was rife with dresses, aprons, bonnets, and other prairie-wear and the kids wasted no time donning the trappings of prairie life in the late 1800s. 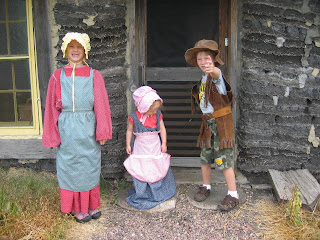 The inside was so fun and interesting too.  Not only could you see what the inside of a sod house might have looked like, but unlike most historical sites, you could touch, sit, and explore the furnishings and pretend you were living in that house. 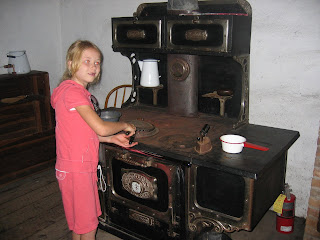 Incidentally, the stove Madeleine is slaving away over in the photo above is the same stove Dad said he had in his childhood home in the 1940s only miles away on a farm in this part of Minnesota.

After leaving the sod house, we continued on down the path towards the sod dugout. 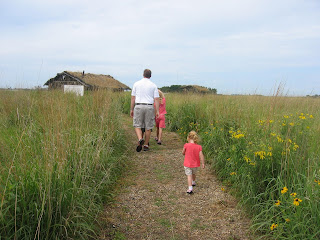 Diana and I both agreed that if we'd had to live for any considerable amount of time in a sod dugout, chances were good our families wouldn't have made it.  Dirt floors, ample room for mice, snakes and who knows what else to get in, not even to mention the time and effort to create heat, food, clothing, etc. I just can't imagine. 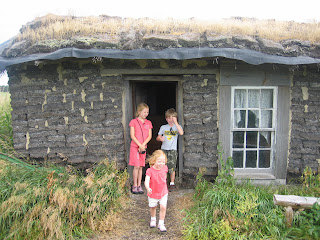 I don't know if you can get an idea from the picture above, but that one room and loft was about the size of the dugout house the Ingalls family moved into just outside of Walnut Grove (the book correlation is On the Banks of Plum Creek ).  At that time I believe the Ingalls family consisted of Pa, Ma, Mary, Laura and Carrie, which is the exact size of my family.  That room the kids are standing in was NOT large.  Oh, and Madeleine took a dim view of the idea that a bed might simply have ropes tied across for a mattress.

We had such a fun time exploring these homes, imagining what life was like for the people that lived in homes like them and, luckily, talking to the owners of the farm about how the homes came to be built and even about their appearance in a History Channel show called "Save Our History" (they appeared in an episode titled "Frontier Homes").

An unplanned stop, but like many other things in life, it's often the unplanned events that are the most notable, and that was true in this case.

We left last Friday after the final day of Vacation Bible School around 12:30 p.m.; it was a late start for the four hundred forty-six mile trip from our home to Walnut Grove, Minnesota, one of the Laura Ingalls Wilder sites.

The trip out was uneventful.  Not serene, not terribly quiet, but relatively uneventful nonetheless.  We stopped the van at this lock and dam on the Mississippi River and the kids were entertained for a few minutes by a rather large ship waiting its turn for the water level to be evened out.

And then, serenity.  Dad and Diana loaded Madeleine and Hank into their car for the remainder of the trip while Joe and I easily chatted with Elisabeth.  We arrived in Sleepy Eye, Minnesota-- the closest we could find a hotel with availability to Walnut Grove-- around 9 p.m. Friday night and while cars were unloaded, hotel rooms checked into, and plans made for the following day, the kids and I (and later the remaining adults) jumped into the indoor pool and hot tub to unwind.

When Madeleine was 2.5 years old she could easily swim with water wings and, if prompted by an adult standing in the pool below her with open arms, would jump into the awaiting arms.  When Hank was 2.5 years old nothing could coax him into jumping into the pool, waiting arms or not.  Now Elisabeth is 2.5 years old and that girl the the craziest of the three.  Not only can she swim easily with water wings, she can twirl around in the water, point her toes out of the water, swim where ever she wants to go and she jumps.  Goodness gracious does she jump.  She cares not whether there is an adult anywhere near her and, in fact, an adult that's too close might to told to "just go 'way; I do it myfelf."  She does leaping jumps, twirling jumps, and cannonballs.  In fact she does any kind of jump Madeleine and Hank do and she does it with no hesitation.

Hmmmm.  This was supposed to be a short post since it was a short day, vacation-wise.

I don't know if I can get on board with Carpenter's love of the Harley Museum, but everything else was spot on. Here is the L. A. Times article.

Beer. If that's your first thought after hearing the word "Milwaukee," you haven't been here lately.

In the last decade, the country's 25th largest city has gone through such a massive revitalization that "cosmopolitan" is a more apt description than "blue collar." Have a Pabst if you wish, but there's a whole lot more to sample, whether it's microbreweries and organic coffee or modern art and architecture.

Joe and I have often (and by often I mean having three small children standards, which is, like, a few times a year and it usually coincides to our symphony attendance since Hotel Metro is across the street from the Milwaukee Symphony Orchestra's performance venue) had cocktails in the Hotel Metro lounge; maybe we were part of the hip set she saw sipping martinis? And Cubanitas? It's one of our favorite restaurants (and the mojitos really are that good).

We just got back last night from a short but very, very sweet vacation.  The destination?  Laura Ingalls Wilder country.  We splashed in Plum Creek and we saw the pageant but saying those things and looking at their website won't do them justice; they each deserve their own post, complete with pictures.

But, as you might guess, I have clothes to unpack and wash, groceries to buy and children who have dearly missed their block friends and want to play, play, play.  But the posts relaying the vacation will be coming.  They have to; the whole trip was too much fun not to share!

How different are my two older kids?  Our church's Vacation Bible School clearly tells the tale today with its theme of crazy hair day.

This is how Madeleine chose to style her hair for the day when her entire class will be sporting wigs, hair color, rubber bands galore, and other weird things.  She's so craaaaaaazy! 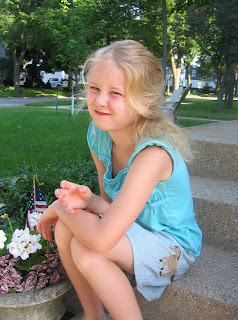 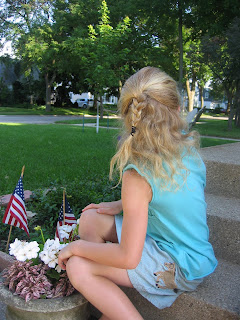 Mom, she explains to me, usually I wear my hair in a half ponytail but today I'm going to wear it in a half braid.

Watch out, she's wild one!

And then there's Hank.  Hank didn't even consider for two seconds not doing something stupid... er... crazy with his hair. 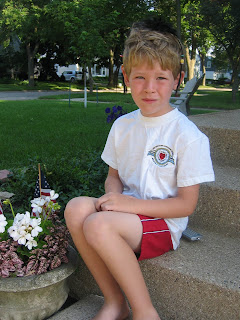 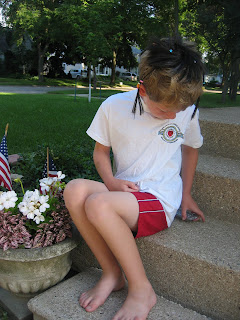 No son, I thought to myself, but you sure act like it.