Last night was peaceful. Serene, even. Joe had the girls upstairs in the bathtub, I was in the kitchen enjoying some of Chopin's Nocturnes while washing dishes and Hank was busy in the living room setting up a Brio train track.

When I walked in to check on Hank this was the track that greeted me: 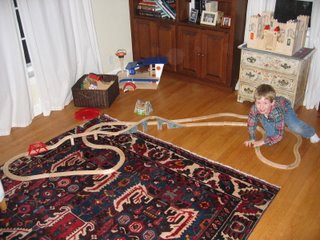 My four year old little genius made the track, complete with twists, turns and bridges all by himself without one iota of help from an adult mind.

Never one to re-do what's already been done, I'll simply refer to you my aunt's blog for some of our Thanksgiving trip highlights. 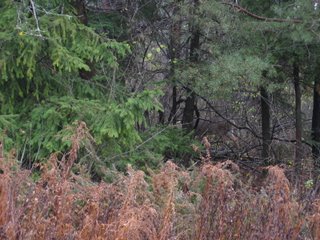 Hank and I spotted this in the woods this morning driving out of the nature center where Hank's preschool is located.

Can you spot what we saw?

Thanksgiving was five days ago and I still feel as if I'm just coming out of my turkey-induced coma.

We spent our holiday in New Jersey with my aunt, cousins and their families and enjoyed delectable food and spectacular company.

Now life goes back to normal. I'm back at my dining room table, coffee in hand, laptop whirring away yet still I don't quite feel as if it's a typical Monday. I feel as if it's special, somehow; as if it's still a holiday.

I'm not worried. Any second now one of the kids is going to start yelling or crying and my peaceful blogging time will be cut off, shattering any illusion that it might still be a holiday. No, I am back on my own with the kids. Time to start laundry, chauffeuring to gymnastics class and restocking a very barren refrigerator.

I hope everyone had a great holiday; I know I did! 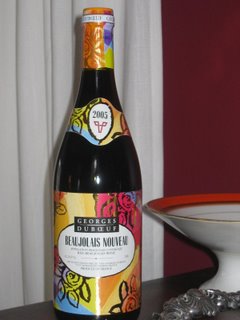 I'm not a wine expert. I don't read any wine magazines and I don't follow what's supposed to be good in a given year.

I do, however, know enough to know that a decent bottle, or even excellent, really, can be had for $10 or less. Since realizing that I've had a difficult time spending more than $10-$15 on a bottle of wine. (Superdad disagrees with me here, to an extent.)

Georges Duboeuf's 2005 Beaujolais Nouveau was brought to my attention last summer after receiving a case as a gift from my dad (thanks again, Dad!). He paid a ridiculously low price per bottle... $1.50 is what I think it worked out to.

My neighbors and I (and sometimes poor Superdad who always seems to be working during neighborhood cocktail hour) burned through the case this summer and it received rave reviews from all consumers.

I haven't scoped out its price per bottle recently namely because I keep falling into the best price (free!) because of a father who knows where to go to get a good price for a case and who seems to enjoy providing my neighborhood’s supply of wine, but I have to imagine it falls into my $10 or less criteria.

I might have been the last person in America who had never graced the inside of a Trader Joe's.

Although it was busy and crowded I still enjoyed getting the lay of the land and managed to walk out without doing too much damage to my bottom line still buy some interesting things. 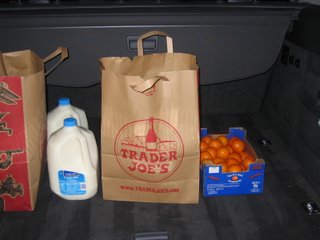 Superdad will be in heaven tonight since I bought his favorite snack in the world: corn chips and salsa.

Areas of the store still relatively unexplored at this point yet on my future "must see" list are: the cheese section (their selection looks great!), their alcohol section (no tequila, Quantum Void) and their cleaning aisle.

Any Trader Joe's experts out there with advice and favorite products encouraged to respond!

I love to look at old photos. I'm often caught flipping through old albums at home and my favorites, I'll confess, are pictures of my kids chronicling their short lives.

Most recently I've been dwelling on Madeleine's past because, well, she's six now. So, for those interested, some pictorial highlights of Madeleine's young life follow.

Here is Madeleine at 8 months old on Easter when we still lived in Janesville. That was the first Easter Joe and I hosted and it was the first of what has become many. 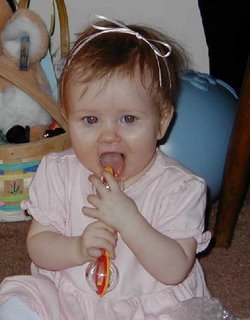 Ah, and here 's Madeleine in the spring of 2002 at about 20 months old. She was visiting her grandparents and after an unusually long period of silence an investigation ensued and she was discovered perfecting her make-up regimen with her Nana's lipstick. 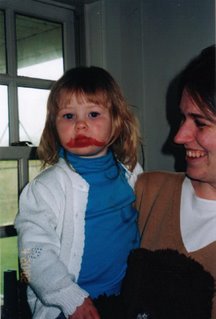 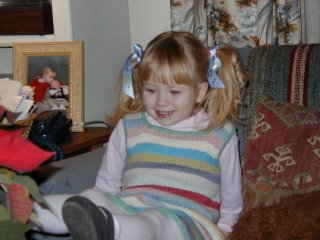 Madeleine at three and a half years of age, looking pretty much as she does now. 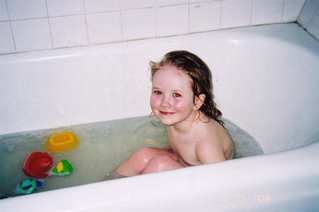 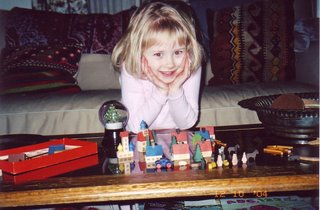 Here she is just prior to her fifth birthday (July 2005) in upstate New York. 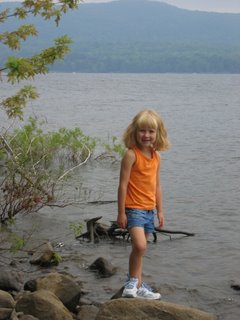 And to cap the ode to Madeleine off, here she is modeling her new bathrobe on her sixth birthday this past August. 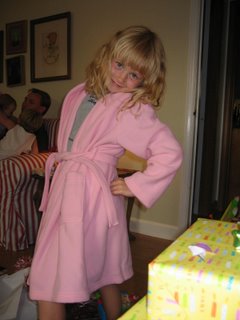 We ordered Chinese food the other night and the kids immediately insisted on using chopsticks. We tried to teach them how to do it properly, but here's what they came up with: 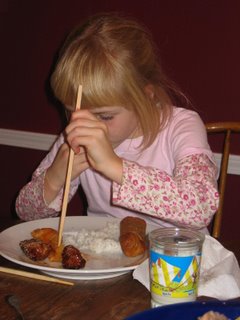 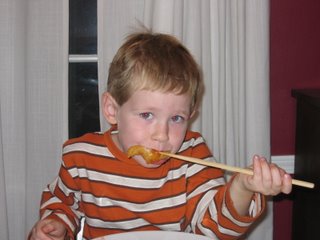 And, just because she's cute: 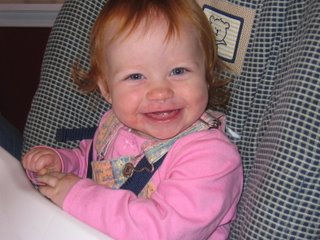 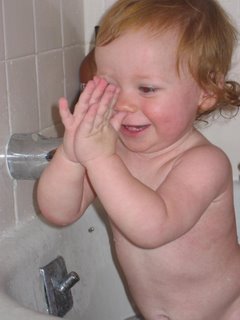 And she can climb stairs now too. Fun, fun, fun!

I suppose you might imagine I’m crying in my coffee.

Why? Because, by and large, Republicans deserved to lose! What has happened to my Republican Party?

Remember 1994? Who was elected: conservative Republicans. Since their election, who’s been running the party? The moderates! And what have they done? Nationally, what conservative goals did we accomplish? Is government smaller? More accountable? Are taxes dramatically lower? Is there more efficiency in government? Those are things conservatives would have done, but moderates didn’t. The moderate, Big Tent Republicans, have drowned the conservative voices in the House and Senate out and I’m not going to take it anymore.

The Republican Party is at a crossroads. I suppose some in leadership will advocate shifting more towards the middle. If that happens they will lose my vote. When Republican candidates run on a conservative message by and large, they win. I believe people want government to encourage them to look to themselves, and the assurance that government isn't going to burden them with over-bloated bureaucracies, regulations and taxes.

I’m reengaged. I want my party back. Conservatives in office, can you hear me? You are our voice. Speak up. It’s time for some more bloodletting. Let’s take back our party.

I've tried to stay away from politics on this blog which I'm sure has surprised many of you who know me. The reason I made that decision though was to try and keep this blog as upbeat and non-controversial as possible. I know many of my readers don't share my political affiliation and I hate to make people feel uncomfortable or, worse, angry.

But there's an election on Tuesday. A very important election. I was going to ignore it (on my blog, anyway) but I just can't. It's too important. There's far too much at stake. There are many reasons I'm voting as I am which is, in case you don't know me, almost universally Republican.

There are a few local races where I am crossing party lines but generally I'm voting my conservative conscience.

Locally we're in trouble. Businesses are being driven out of Wisconsin for a multitude of reasons, all of which warrant a change in administration, but the most frightening is the underhanded way our current governor is doing business. There are multiple (multiple!) examples of companies being denied a state contract, said business giving the Doyle campaign an obscene amount of money and -voila!- they're awarded a no-bid contract. Liberal or conservative, this should be more than a little troubling and, in my opinion, should negate every reason someone might have to vote for him.

And no, they (politicians) don't all do it. They aren't all corrupt and they aren't all the same (ethically). Contracts are for sale in Wisconsin and Jim Doyle needs to go.

My representative in the House will win, so I don't really feel the need to puff him up, but I will say the I generally believe Republicans deserve to return to Washington. Many of you know it pains me to say that. Most of the Republicans in the House and Senate have been abusing my conservative sensibilities for a few years now, and many haven't been much better than a mainline Democrat, fiscally speaking.

For the War in Iraq or against it, we're now there. America's troops are in harm's way and what happens there will directly affect global terrorism for years to come. We need to win in Iraq, and we need to win decisively. The election of anyone who's suggested they might even consider a premature pullout is extremely dangerous, in my humble opinion, not just for the troops who are there but also for a nation that was brutally attacked six short years ago.

Terrorists are still out there. We know what their goals are and anything less than total victory on our part means that someday, somewhere, we will once again fall victim to some vile plot. Their depravity and the evidence of their past destruction is a dangerous combination and not one I'm willing to trust into the hands of a party whose leader said that the idea that we might be able to win in Iraq is "just plain wrong."

I’m not looking to incite a riot here, or even a debate really (though of course you’re free to respond!) but I want to articulate a little of what I’m feeling about tomorrow, why I’m voting the way I am and why I feel it’s so important.

I love L.L. Bean. Even when they screw up they are able to make it call better, and with minimal fuss.

I ordered some tights for Madeleine before school started and the first time she wore them to school they snagged and ripped. I returned them since they were supposed to be thick, durable tights able to withstand most things a 1st grader could throw at them.

So, while I’m not overly impressed right now with the quality of their tights I am thrilled with their customer service and am more than willing to give their tights a second chance. 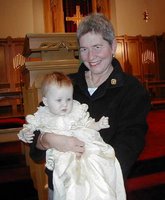 Had she lived, today would have been my mom’s sixty-first birthday.

Instead of the cake we would be having if she were here, I’m making Junket tonight. Few people ever know what I’m talking about when I speak of Junket, but it was a common dessert in my home growing up. Mom loved it and made it often enough that I can’t think of a dessert that reminds me of her more than that one.

Mom was an excellent cook, but she excelled at baking. She loved desserts, both the eating and construction of, and in recent years sort of became in charge of desserts at any family gathering. Here are the cakes she baked for Madeleine's baptism party in January of 2001 (which is also where the picture of Mom and Madeleine as a baby, above, was taken): 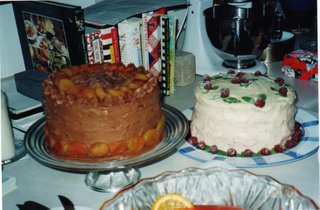 Her numerous gardens were well-known and spoken of with the highest regard. She knew more about what to grow, where to grow it and what would look just perfect in any given spot than any other person I know, professional horticulturalists included.

Her favorite garden, and mine too, was her pool garden which is pictured here: 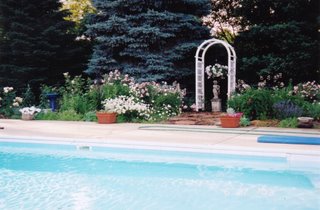 She was a warm, interesting and talented woman, one whose absence is noted by many but also, more importantly, whose life is remembered and celebrated by so many.

Happy Birthday, Mom, we miss you!