Did you have a nice Thanksgiving? We did.

Madeleine learned how to use her new sewing machine, 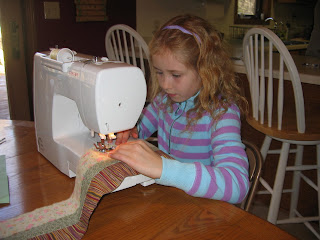 Hank got to do a little hunting with his dad, grandpa and uncles 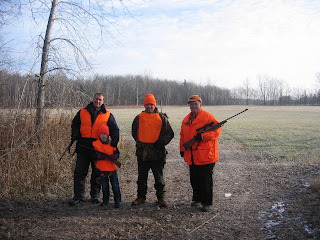 and Elisabeth played with siblings and cousins until she couldn't prop her eyes open for one more second. 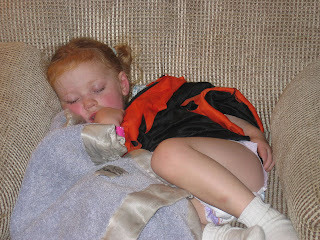 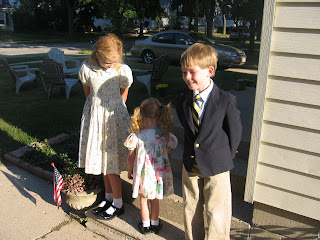 Send your own ElfYourself eCards

So, it turns out this Elf Yourself site is just as much fun as it was last year. More, in fact, since now you can add up to five elves and choose different dances and things. Fun!

Late last night Joe and Hank left for a few days of deer hunting.  Dad and Diana were nice enough to keep Madeleine and Elisabeth in Silver Lake one more night so I had an entire evening at home with no one else.  Believe it or not, it was the first opportunity I have had to be alone for an overnight in this house since we moved here over five years ago.

Right after Hank and Joe left I walked around my quiet, peaceful, empty house and reveled in the the sheer emptiness and absolute quiet.  For twenty hours at least, any mess that would be made would be mine (Joe's coat wouldn't be slung over the living room chair!  Legos wouldn't be underfoot!  No American Girl dolls hair salons in the bathroom!), any noise I heard would be created by me (No whining!  No complaining!  No tattling!) and for that small amount of time my time would be my own.

It hit me right around 11 p.m., after I had spent the better part of my evening absorbed in a most excellent book, that I could have gone out if I'd wanted to.  I could have called friends. I could have gone out for a nice dinner. I could have gone to see a movie.  Heck, I could have done anything and I wondered if maybe there was something wrong with me because as much as I love my friends and eating out and seeing movies and as much I would have enjoyed doing any number of things, I never even questioned-- nary a thought crossed my mind-- that once the house was my own I would stay there, utterly and perfectly alone for however long my family would allow it.

My girls are back now, and new messes are being made and their shouts and laughter are ringing throughout the house and yet I don't regret staying in and spending an evening alone here, even if that does mean there's something wrong with me.

You know what the worst part of my sixty-seven degree house with old drafty windows besides being chilled all the time? It's being hungry all the time for things like mashed potatoes and gravy, fresh, warm bread and all sorts of other kinds of stick-to-your-ribs types of food. Yeah, I can hide under bulky sweaters now because I need to to not turn into an icicle, but gee whiz, if I keep eating like this and feeling so starving all the time, what happens in June?

Please tell me there are others out there in freezing areas who are feeling hungrier than usual!

If you're a pickle person, what brand is your favorite? I am practically addicted to Classen Kosher Dill pickles. Joe, on the other hand, is a Milwaukee's pickles guy while I think they're so inferior to Classen's pickles that I hesitate to entertain debate on the matter.

So, settle the debate. Which brand makes a better pickle?

A few weeks ago we made our annual pilgrimage to Door County to celebrate Hank and Elisabeth's sixth and third birthdays. The weekend was, as it always is, extremely relaxing and fun.

But one of the trip's highlights for me is the following picture. Hank has been asking for a Wii since last Christmas. And when I say ask I really mean talking about nonstop for ten months.  That boy really, really wanted a Wii more than almost anything that exists on earth.

I bet you're all sitting on the edges of your seats wondering what we ended up doing the other night. Why in the world hasn't she posted about what she and Madeleine did yet the other night?! I can't eat, I can't sleep...

In any case, I ended up deciding simple was better. We already had an exciting Saturday in Chicago planned and were stuck in WFB anyway until Saturday morning because of an afore agreed upon carpooling arrangement with our friends, so I thought the emphasis should just be on being together. First off we went to Madeleine's favorite restaurant for dinner which, thankfully, is not McDonald's anymore (it's now Noodles and Co., if anyone really wants to know). We had such a terrific time. Madeleine barely stopped talking to eat and the entire time she kept smiling and sighing and saying Isn't it fun to have just us here? Madeleine then chose to go shopping (she wanted/needed new jeans) and then home for popcorn and the end of The Wizard of Oz.

It was a very low key evening, but we both agreed it was a tremendously fun time and something we wanted to do again soon.

What Should We Do?

Tomorrow Madeleine and I are going down to Chicago with a pair of friends (a friend for me and a friend for Madeleine, who happen to be another mother/daughter pair). Joe saw this as an opportunity to head north and prepare for the opening of gun deer season next weekend (apparently some Wisconsin hunters have been bow hunting for weeks) by checking his deer stand, sighting-in his new scope and all sorts of other things I don't really understand and probably never will.

But he, Hank and Elisabeth are leaving tonight leaving Madeleine and me with a night on our own. I have some ideas of what I want to do with her, but this is such a rare opportunity we have that I want to make sure I've vetted all my options.

Apparently lithium batteries don't hold their charge forever even when you diligently drain and recharge them, a lesson I've learned the hard way in regards to my now ancient Canon Powershot S410 (it used to seem so cutting edge-- and that was only four years ago!). My archaic batteries now take, at most, one picture even at full strength.

Do you know how easy it is to get a new lithium battery? Of course you do. Probably everyone does but me who seems to prefer complaining about the problem rather than proactively seeking a solution. Yeah, it's easy. Really easy.

So, hopefully, in a matter of days with a little help from the UPS delivery man and Amazon, I will be able to chronicle our lives digitally, once again.

First off, I want to extend my congratulations to Barack Obama and to everyone who supported him.  It is exciting when a candidate you believe in wins an office you so desperately thought they deserved to win and I'm happy for you all today. I know the feeling, and it's a great one.

I can't fault my fellow Americans for not embracing John McCain.  While on a personal level I find Senator McCain's career admirable, there were many, many issues on which I disagreed with him.  He never articulated what I wanted to hear and what, frankly, I think a lot of Americans needed to hear to cast their votes his way.

I am upset today, but not how you'd think, probably.  I'm upset with the Republican party which let itself succumb to the temptations of power, and the desire to hang onto it, no matter the cost. I'm angry with myself.  Yes, life has kept me busy, but I've been completely disengaged in politics since I stopped working in the field right before Hank's birth.  How can I complain about the outcome if I wasn't part of the process?  And, yes,  I'm more than a little nervous about the future economic stability of this country.

In any event, I'm happy it's all over.

I hate election day.  I really do.  Already my stomach is in knots and already I feel like I want to throw up because I'm so nervous.

I can't ever remember our country being at such a crossroads or an election being so critical to the direction the United States is going to take.  If we, as a nation, collectively decide that we want a person to be president who is going to shove more and more government down our throats, well, I will accept that.  For now.

But I cannot, for the life of me, wrap my head around the idea that citizens of the freest country in the world want more federal government mandates, more government restrictions and more money being collected and redistributed by one of, if not the, most ineffective, inefficient entities that exist.  I accept it, but I don't understand it.

I wish I could say I am voting for liberty; for freedom, but in my opinion, neither of the two viable candidates really understands the concept, and the reality that government is not inherently good or desirable and works best when it doesn't exist.  But while John McCain may not fully embody someone who, in my opinion, fully comprehends the importance of liberty and the absolute necessity that we remember our country is a republic, and not a democracy, and why that distinction is really, really important, I am even more certain his opponent will give us the antithesis of liberty.

If Barack Obama becomes president, I am not a doomsayer; this country will survive.  But our citizenship will be less free.  A country cannot centralize its government and create more government programs without infringing on its peoples' freedom and rights.  A citizenship may choose to accept the loss of liberty, and our electorate may choose to today, but we cannot get around the fact that we will be less free tomorrow than we are today if Senator Obama becomes President Obama.

I leave you with a few of my favorite quotes on this, election day.

It is seldom that liberty of any kind is lost all at once. -- David Hume

Government does not solve problems; it subsidizes them. -- Ronald Reagan

Man is not free unless government is limited... as government expands, liberty contracts.  --Ronald Reagan

Government is not reason; it is not eloquent; it is force.  Like fire, it is a dangerous servant and a fearful master. --George Washington

I predict future happiness for Americans if they can prevent the government from wasting the labors of the people under the pretense of taking care of them. -- Thomas Jefferson

When a government takes over a people's economic life it becomes absolute, and when it has become absolute it destroys the arts, the minds, the liberties and the meaning of the people it governs. --Maxwell Anderson